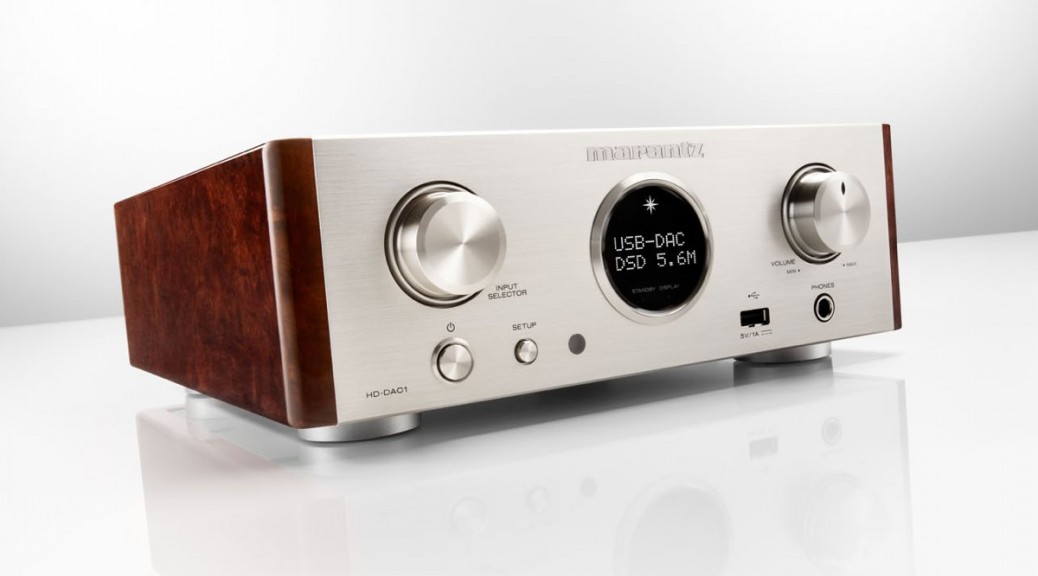 So I’ve had my eyes on DSD DACs for sometime, and realized long ago that $500 to $1,000 would be the sweet spot on quality for price.  I waited about a year and sure enough, the DSD DAC market heated up as Acoustic Sounds, Blue Coast,  and other music vendors starting singing the praises of DSD.  And the prices of high quality DSD DACs came down from prices in the thousands to well under four digits for the same goods dressed up differently.

Thankfully down into the realm I was looking for, I pulled the trigger on a Teac DSD DAC that offered promise and by virtue of being DSD it was the best sound quality I’ve heard from a music server, but I still found it lacking in some areas of nuance.  And isn’t nuance what this all about, especially at this level of the game?…

So I waited patiently whilst listening to vinyl for the next DSD DAC player to come onto the scene.  And when Marantz stepped up with their recently released HD-DAC1, I figured it held promise since I had already noticed the superior sound of their SACD player to my Teac DSD DAC, which came as a surprise (DSD Music Server project).  I later attributed this to the Op-amps in the Teac vs. discrete circuitry of the Marantz in the form of their HDAM circuits (Op Amps are holding back my digital quest).

And, the Marantz has a remote control, a luxury my Teac lacked but I was willing to forego to prevent some crappy volume control IC (Integrated Circuit) messing with my fastidiously preserved signal path (Why audiophiles don’t get to have a remote control).  So I almost held my breath to figure out how the Marantz was pulling that one off, since more likely than not it would be a deal breaker.  To my delight I discovered it utilized an ALPS motorized POT (ALPS analog volume controls and rotary switches), and with that I would finally have remote volume control whilst streaming DSD music from my Mac Mini music server (Mac Mini as a Music Server).  PCM files have digital volume control, but not DSD (the less digital processing the better, just the digital to analog conversion thank you very much).

So I purchased the HD-DAC1 and had it shipped to Maui, where I could do an A/B test against my Teac prior to bringing it to Canada.  Sure enough, unquestionably better sound quality.  I forget all the subjective terms some use to describe the differences: warmer, more transparent, airy, full-bodied (are we tasting wine here?), etc.  I’ll just say that if you ever have the opportunity to hear the two DACs side-by-side you will hear the difference and leave you to come up with your own accolades.

Off the HD-DAC1 went to Canada (it still wasn’t available for sale in Canada when I purchased it in the USA) to perform for my mostly digital music collection serving my Magnepans.  As you have probably gathered if you’ve read much of this blog, I have two very different reference systems in the works.  My Canadian system is digitally oriented with planar speakers and the amps to drive them whilst my Maui system is analog (vinyl) oriented with Kef speakers that love everything analog (The venerable Kef 104/2).  They will both be overlapping in time, but that’s how things sit as I write this.

So I had great expectations as to what the HD-DAC1 would do for my digitally oriented Canadian system, and it didn’t disappoint.  I grabbed a few reference recordings (What is a “reference recording”?) and nearly giggled when I heard them.  My only regret was that I didn’t have more time to listen to it.  Something to look forward to next time I go back.  And, just in case I ever capitulate to listening to music with headphones?…  (Headphones, Earspeakers, or whatever you want to call them…) I’m set!