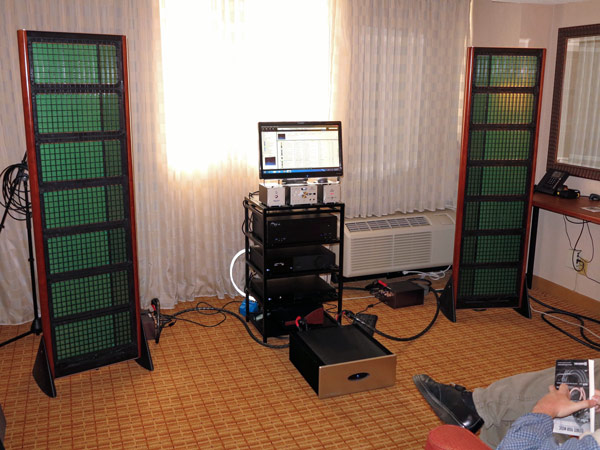 As many of you know, I’ve been working on a DSD Music Server project for neigh on a year now. Still a work in progress but I just couldn’t resist making some initial comparisons and evaluations that have been a long time coming. I based my purchase decisions for music formats over six years ago based on auditions and comparisons of the formats on a high end system in a shop in Seattle, but now I finally have my own (even better) systems to compare and contrast.

Ok…  So I’m gonna avoid a lot of the B.S. and cut straight to the chase.  But first, one major caveat.  Since I have no remote control (Why audiophiles don’t get to have a remote control…).  I used the source selector switch on the preamp and therefore wasn’t in the sweet spot.  Before you say, “all bets are off then!” let me explain.  My Maggie’s like to be very far out from the rear wall in my listening room.  That, combined with the fact that they are bipolar speakers and radiate in an equal and opposite fashion back towards the octagonal bay windows (three big panes of glass) I actually discovered another sweet spot behind the speakers, where my amps are.  It’s very small and goes away if I move or tilt my head even inches, but is unmistakably there 🙂

So here are the results of the A/B/C tests (yes, I went to the trouble to sync all three sources and even volume match DSD DAC to SACD Player).

Vinyl – dramatically different, another flavour entirely. This is the first time I’m not going to call it “better” just “different”.  That’s how good my DSD has become.  So the vinyl has a rich, warm, full bodied sound.  My Maggie’s aren’t big in the bass department but I also know from my Maui Kefs (best bass I’ve ever heard) that that is another area where vinyl kicks ass. The high frequency response doesn’t seem as crystal clear as SACDs or DSD DAC, but I’m wondering if that is because it’s less pronounced due to the full dynamic range that vinyl offers.  TBD…  Will need to do more listening and will need to be in the sweet spot, the one in front of the speakers, to evaluate further.

SACDs – The gold standard of digital audio to be sure.  Crystal clear highs, amazing transient response, fantastic imaging. And exemplary during quiet passages due to very little noise.  Sounds just a bit thin compared to the vinyl, but now we are talking pros and cons in that regard since it sounds so amazing in other areas. Although not part of the comparison, I heard Tubular Bells like I’ve never heard it before listening to it from the DSD DAC later in the sweet spot, and that says a lot!  Of course, my Maggie’s LOVE that album, it plays into all their strong suits and I’ve only played the vinyl on my Kefs on Maui.

DSD DAC – almost indistinguishable from the SACD but I’ll give the SACD the edge, which came as a surprise to me since the DSD DAC doesn’t have any issues that come with the transport and therefore if anything should sound better. I’m not saying it sounded harsh or harsher cause neither of the sources sounded that way, they were both amazingly not so for digital (thank you DSD). What I will say is that the SACD player sounded more analogue-like.  Just a very small amount smoother and warmer.   I’m guessing that is due to the OpAmps in the output stage of my DSD DAC (Op Amps are holding back my digital quest) vs the very high quality discreet circuitry in the output stage of my Marantz SACD player. Can’t be sure without other DACs to compare of course, but that would be the logical conclusion, which I came to after doing some further investigation and finding that the DSD DAC uses OpAmps, which make sense for the price – still trying to get champagne taste on a beer budget and I’m doing really well so far!

When I sit down to listen to music, I want the best quality possible, which means DSD, 24 bit PCM and vinyl.  I had loaded up around 5,000 tracks in 44.1k/16 bit PCM (Redbook CD quality) onto my music server, thinking that I’d listen to them if that’s the only format I have them in.  But I never did.  I guess that shouldn’t be a surprise, that when I sit down and listen to music Redbook CD quality just isn’t going to be on the menu.  At first, I did lots of A/B testing of the 44.1k/16 bit albums to the same album on DSD and/or 24 bit PCM.  The results weren’t surprising, very drastic differences in sound quality.  I finally figured, “what’s the point?”, and removed the 44.1k/16 bit tracks from my music server.  Not because they were taking too much space, the inferior bit depth and sampling rate results in very small file sizes, but rather because I didn’t want them cluttering up my selection of high definition digital music with files that are sub-par.

Postscript – I later discovered that it was in fact the OpAmps in the Teac DAC that was infecting my digital music server (Op Amps are holding back my digital quest), so I replaced it with a Marantz that uses discrete circuitry (Marantz DSD DAC).