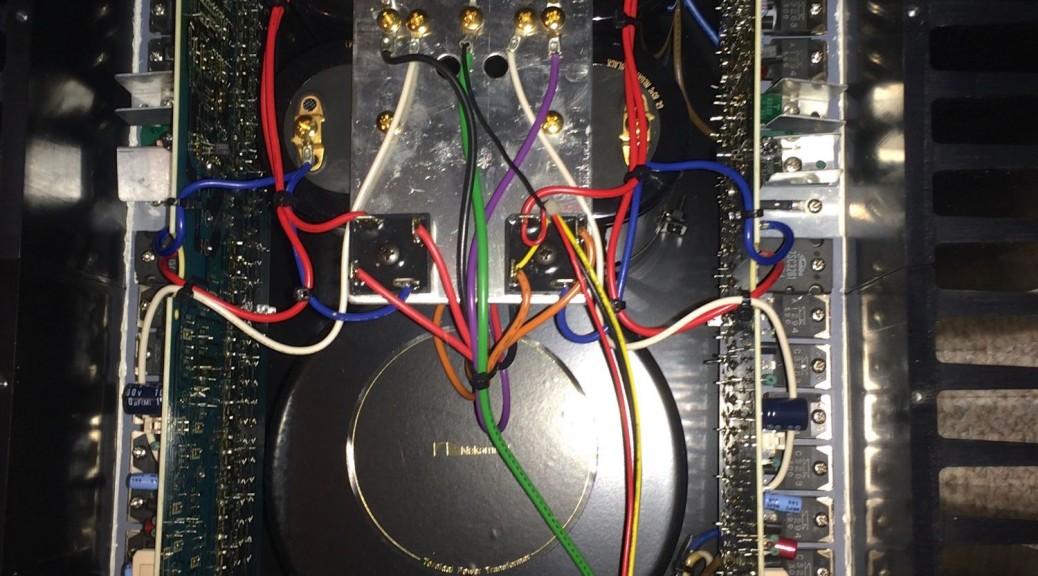 I’ve lusted after this power amplifier ever since it came out in 1988.  It just looked so damn sexy.  It originally retailed for $1,595 which isn’t a lot by today’s standards but certainly was back then, especially for a recent college grad trying to get ahead in San Francisco.   So I never owned it and instead settled on the lessor Nelson Pass design in the form of the Adcom GFA-555II to power my Martin Logan Sequel IIs at the time.  Well, I ultimately ended up with two GFA-555s powering those Sequel IIs and still wasn’t satisfied, but that’s another story (It’s all about reducing mass for the transducers).

So fast forward 26 years and I’m on the hunt for an appropriate  power amplifier for my chosen Maggie MG-12s.  This baby had been on Kijiji (Canada’s Craig’s List) for a few weeks for exactly half the original retail price, not bad 26 years later but still a friggin bargain for anyone comparing it to present new offerings.  But it was in Edmonton, a 3.5 hour drive from Canmore.   I ultimately decided to make the trip to have a look at the PA-7 as well as a couple other vintage high end audio components, which I also purchased (An Edmonton audio-venture (names changed to protect the guilty)).

So what first caught my attention about the PA-7 was it’s gorgeous build quality and industrial design, a fine example of industrial art (thank you Nakamichi).

I can remember like it was yesterday the first time I set eyes on this baby.  It’s mesmerizing and belongs in a museum of industrial design.  Let’s face it, brute strength power amps aren’t usually a thing of beauty, but this one is truly “beauty and the beast”.  Everyone already knows that Nakamichi made it’s name on the very best quality home audio cassette decks in the late 1970s.  So they had cash to burn, and wanted to become a major player in the high end audio market, which was dominated by US designers and manufacturers.  So what do they do?…  They recruit Nelson Pass (of Threshold) as a “hired gun” and combine his designs and circuit topology with their deep pockets and efficient production techniques.  The result?…  What is essentially a Threshold power amplifier but way better looking and less than half the price.

They were supposed to just license his STASIS technology, which combines the benefits of Class A amplification without the drawbacks (runs stupid hot = very low reliability) into a hybrid Class A/Class AB power amplifier with optical bias.  Well, they didn’t just license STASIS.  Rather, the first generation of the PA-7 is a direct copy of the equivalent Threshold amp.  A lawsuit ensues, then Nakamichi releases the PA-7II with an altered design providing 25 more WPC (watts per channel) and a higher price tag.  But everyone knew then and knows now that the original PA-7 was, “the one to get”.  As a side note I also sourced a Nakamichi CA-5A pre amp of the same era which was also designed by Nelson Pass and executed by Nakamichi for my Maui system (The Nakamichi CA-5A preamplifier).

I found an interesting review on the now legendary PA-7 in Tone Publications, an online magazine I’d never heard of but certainly agree with the author’s findings.  It’s interesting, since he ended up pairing the PA-7 with an Audio Research SP 9 Mark II preamp and a pair of Magnepan loudspeakers, just as I did.  It all makes perfect sense in retrospect.  I found myself there by time spent in the listening chair, not reading reviews, much as I suspect he did…