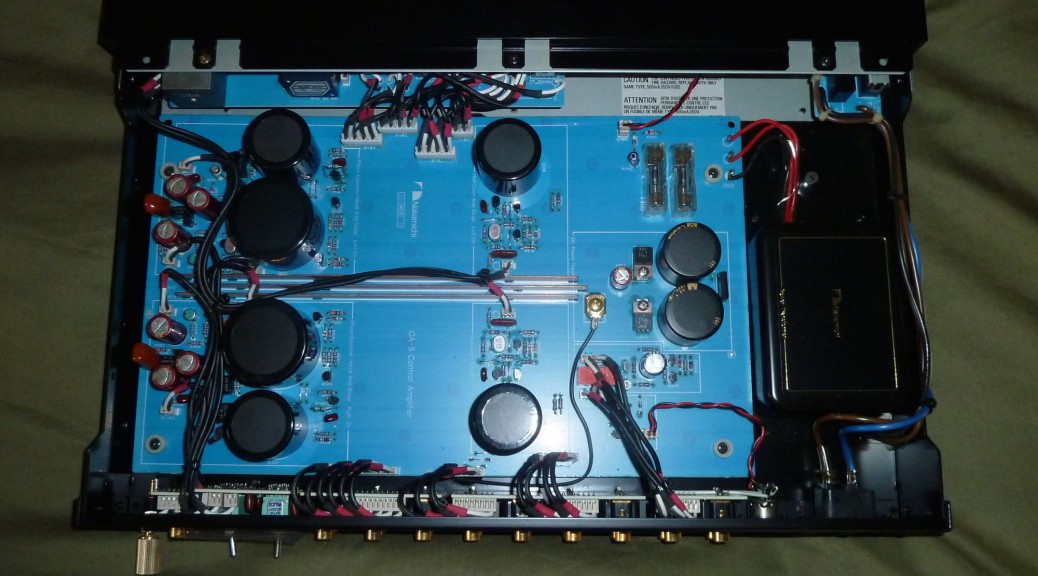 This legendary solid state preamplifier is the mate for the Nak PA-7 power amp (The Nakamichi PA-7 power amplifier).  It is also designed by Nelson Pass and follows the same precepts as his Threshold (and later Pass Labs) preamps and power amps, which is simple, short circuit topology with nothing but the highest quality fully discrete components in the entirety of the signal path.  It lacks anything non-essential to that end, including tone controls of any kind (Why I prefer analog preamplifiers that lack tone controls).  Nakamichi later released the CA-5AII, replete with tone controls, which makes the original CA-5A widely recognized as “the one to get”, even though the CA-5AII has a defeat switch it still adds additional, sound sucking and sound altering tone control circuitry.

One look at a “nude” photo of the CA-5A tells the whole story.  Three beefy copper power rails running down the middle of it’s “dual mono” circuit board (which is important to reduce crosstalk between left and right channels, which compromises the stereo imaging), very short wire runs, very few circuit board traces, and nothing but top quality parts, including all ALPS for the controls (ALPS analog volume controls and rotary switches), and you can really feel the quality when you use them.  Nelson Pass went on to separate the power supply into a separate chassis, which is the design in his Threshold FET 9 preamp.

The photo above shows the cartridge loading options I look for, including provisions for moving coil cartridges such as the Denon 103R (The formidable Denon 103 vs. 103R low output moving coil phono cartridges – is there really a difference?…).  In fact, cartridge loading is the only slightly complex circuitry in this entire preamp, but is essential to top notch phono playback.  Audio Research went so far as to eliminate the cartridge loading circuitry entirely in their SP9 Mk II preamplifier (I may be a purist, but…).  Instead they, ship the resistors and capacitors necessary to change it with the preamp itself.  While I agree with this approach in theory, in practice it’s a real pain in the ass to have to remove and replace (by soldering and desoldering) resistors and capacitors just to optimize your phono section for your chosen cartridge.

If you look at the schematic in the photo above you can immediately see how simple the circuitry in the Nak CA-5A is.  The blocks labeled on the schematic diagram are even labeled on the PCB (Printed Circuit Board) itself.  The Nakamichi CA-5A clearly subscribes to the “less is more” approach.