When you think about it, it’s just common sense.  A low mass phono cartridge is going to track the nuances and subtle but rapid transient changes of a record groove more nimbly and with greater aplomb than one that is burdened with the task of throwing extra weight around.  That’s the whole idea behind moving coil cartridges (which are universally recognized for their phenomenal transient response), reduce the moving weight by putting the coils rather than the magnets on the end of the stylus cantilever since their mass is so much lower (The formidable Denon 103 vs. 103R low output moving coil phono cartridges – is there really a difference?…).  It’s the same with almost any high performance gear that requires fast response, from race car suspensions to avionics – the objective is to lower moving mass.

But listening to music is far more subjective than checking lap times on a race track, so some will prefer the sound characteristics of slower moving traditional speaker drivers and/or phono cartridges, even though their “performance” is hindered by their (quite literally) massive designs.  I’ll say one thing though, the first time you hear familiar music reproduced with low mass transducers (i.e a moving coil phono cartridge well matched with a pair of planar loudspeakers) will be revelatory and you will likely fall completely in love or be utterly disappointed.  It’s one of those classic love/hate scenarios.  Why?  Because the very thing that makes these speaker drivers  perform so well at high frequencies is their achilles heel for low frequencies (a low mass phono cartridge is typically good for the full frequency range, however).  So let’s look at the physics involved in low-mass loudspeaker designs.

Ribbon tweeter transducers are the very lowest mass and their thickness is measured as low as 4 microns, but their implementation is limited to high frequencies.  Electrostatic membranes come in a close second and are typically 10 to 20 microns thick (those manufactured by Martin Logan are 12 microns), and quasi-ribbon membranes are a distant third at around 500 microns (or 0.5 mm).  To put these numbers in perspective, the thickness of a typical human hair varies from around 50 to 120 microns and averages in around 100 microns.  Let’s look at each type of transducer separately.

Ribbon tweeter transducers:
A ribbon tweeter uses a very thin membrane suspended in a powerful magnetic field to reproduce high frequencies.  In their purest form, the electrical properties of the membrane itself suffice, such as when aluminum is utilized.  Other forms use metalized plastic film, where a very thin deposition of conductive material is applied to create a planar voice coil (though it’s not a coil at all, but rather evenly deposited over the entire membrane).  Ribbon tweeters are extrodinarily accurate but also are very limited in frequency response.

Being so thin, they are also extremely fragile.  Not such an issue with the small and enclosed traditional ribbon tweeter.  But with the revolutionary 55″ long Magnepan ribbon tweeter, just dropping them flat on the floor will rupture the membrane, as will vacuuming the Maggies cloth cover, or even leaving a door to your listening room open on a windy day.  Fortunately, the membrane itself is user-replacable at nominal cost (although not covered under warranty).

Many speaker manufacturers have experimented with arrays of ribbon tweeters in an attempt to create a larger line source and therefore overcome their individual limitations.  The monsterous Infinity IRS (thankfully short for “Infinity Reference Standard”) with it’s elaborate arrays of EMITs (their marketing jargon for ribbon tweeters)  comes to mind as a good example, but at nearly eight feet tall and with two separate cabinets per channel they are far from practical for most homes (see photo below). 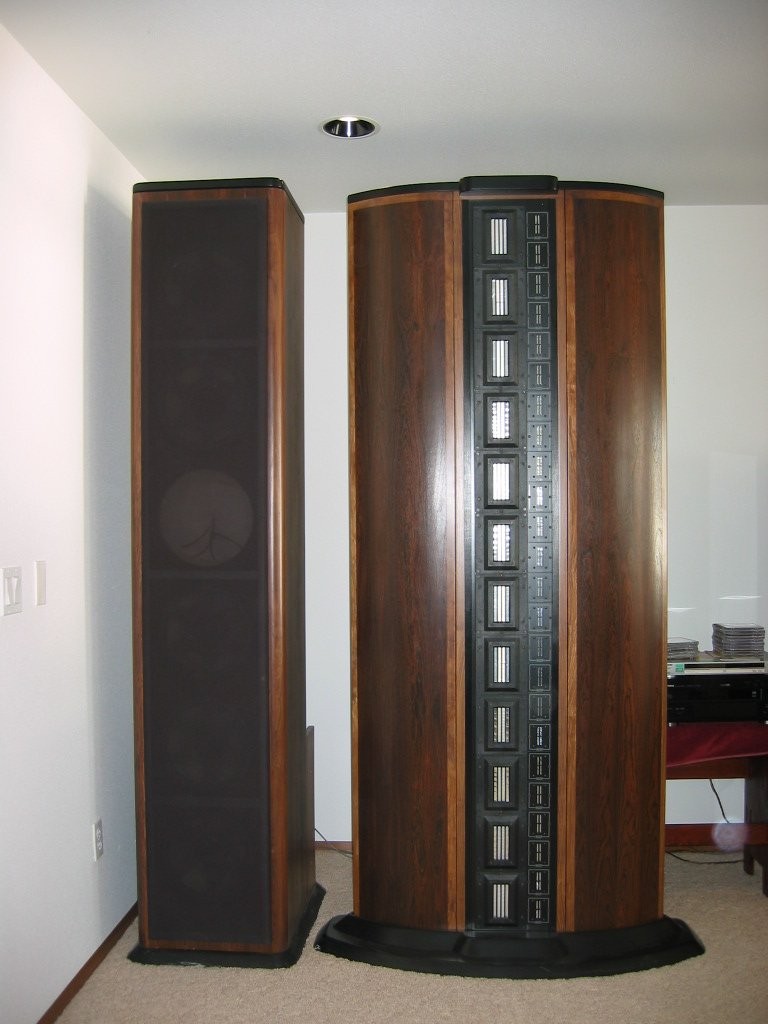 The ESL design has been around for decades.  Anyone who has heard of (or heard) the Quad ESL that originated in the 1950s will also remember what a breakthrough that loudspeaker was.  It brought ESL technology into a workable, (almost) full range speaker for the first time.  Although it was severely handicapped in many respects, it offered up sonic goods that were unprecedented and put ESL technology firmly on the audiophile map.  Many companies followed suit, Apogee being one of the main early players, but most came and went.  When Martin Logan showed up on the scene they brought a combination of technical innovation and fiscal staying power that ensured the technology persevered.  In 1986 Martin Logan offered up the very well received CLS (Curvilinear Line Source) model.  Their large, curved panels effectively solved three issues with ESLs – beaming from a line source creating a very small “sweet spot” (i.e. listening position), dipolar radiation canceling out lower frequencies as they pass around the side edges of the panel, and limited frequency response (their specifications claim the CLS goes down to 45 Hz).

These design precepts continue unchanged in Martin Logan speakers to this day, but very early on they went the path of hybrid speakers to deliver the bass response most listeners demanded.  Perhaps the most successful ESLs of all time was the Martin Logan Sequel II, which was featured at the end of the movie “The Italian Job” and made frequent appearances in the popular TV shows “Sienfield”, “Friends”, and others.  I owned a pair of these for around six years from the late 1980s to the early 1990s and I can tell you from direct experience that it’s weak point was the crossover between the ESL panels and the traditional bass drivers (a weakness that Magnepans don’t suffer from since their quasi-ribbon drivers are full range – more on that later).  I tried everything including massive amounts of power bi-amping them and never got what I considered to be satisfactory results and ultimately sold them (with the power amplifiers).  Having said that, it was the late 1908s and unfortunately the era of CDs so they never had a fair chance given they were playing crappy 44.1k/16 bit music (The “Dark Ages” of High End Audio).  But, I’ve been recently helping a friend in San Francisco set up his system with a pair of Martin Logan Ascents and I’m still not impressed, even with high definition digital sources such as SACDs. No matter how much we tweak them, bi-amp them, reposition them (and he’s got a fantastic room), I am still left feeling something lacking when I sit down and listen.  And Matin Logan’s latest no-holds-barred $80k flagship Neolith model wins the ugly duckling award, at least to my taste, see photo below (the WAF must be off the charts on this one). 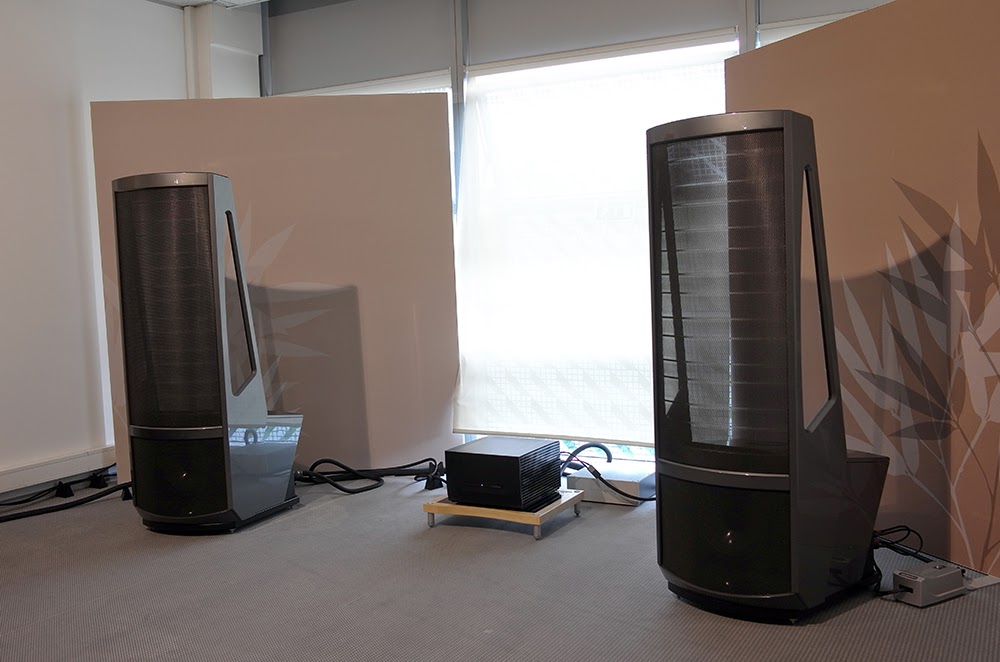 Quasi-ribbon transducers:
The quasi-ribbon transducer is one in which the membrane is overlaid with wire and driven directly with the signal from the amplifier passing through the wire, rather than that membrane being suspended in a powerful magnetic field as with a traditional ribbon transducer.  As far as I know, Mangepan (formerly Mangeplanar) is the only one making these.  What they sacrifice in higher mass they more than compensate for in full range ability.  Magnepan loudspeakers (also know as “Maggies”) are never gonna fully satisfy rock fans, but for those who care for a wide range of music including acoustic, jazz and classical this design really delivers the goods.  Maggie’s don’t have conventional low frequency drivers (i.e. woofers) and therefore are not a hybrid design.  They are two-way or three-way speakers comprised of ribbon and quasi-ribbon transducers with very large surface areas to deliver full frequency response.  As one might expect, the bigger the panel, the lower the frequency response (i.e. more bass).  While Maggies are quite large panels, they remain relatively flat (about two inches thick) and therefore they appear more elegant to me. 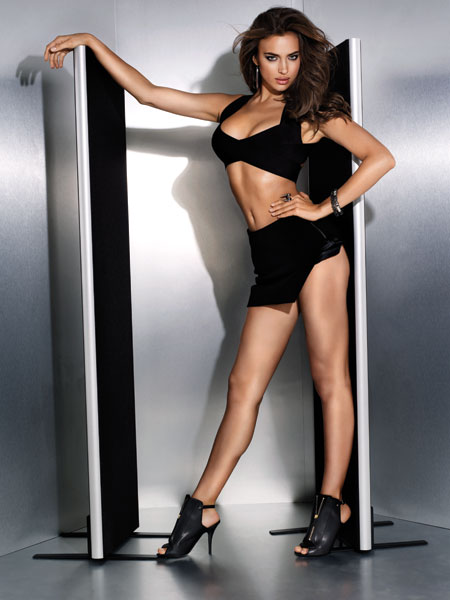 Ok… my bad, totally cheating, did you even notice the speakers?…  A more indicative photo here. 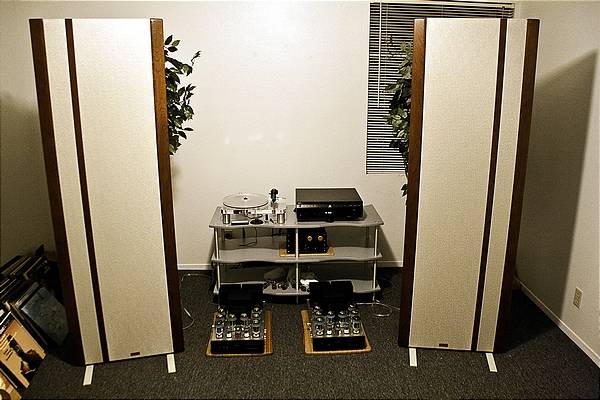 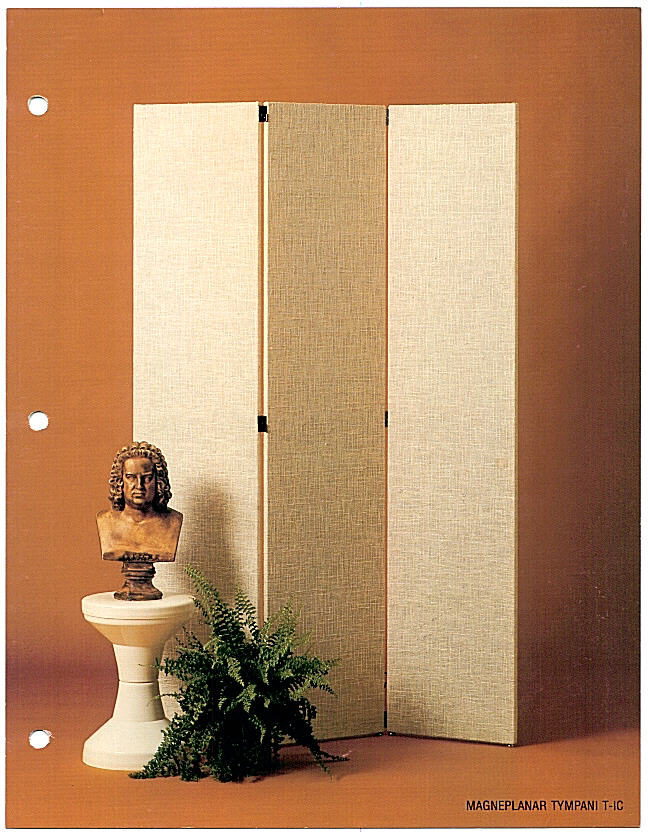 Maggies have been around for decades and have changed very little in their design over the years.  Original principles, refined.  They don’t suffer from the acoustic (and esthetic) limitations of hybrid designs and also don’t require step-up transformers in the signal path and/or wall current to operate.  They do have crossovers but in their higher end models these are external boxes that can be easily modified (or “hot rodded”) and they also offer true, active bi-amplification (Why bi-amping isn’t always what you may think) abilities as shipped, without modifications.  They are very dependent on room acoustics (Planars… The room is the enclosure) and fussy about positioning and require colossal amounts of quality, high current power to operate.  Even the relatively small Mangnepan MG-12 makes my high current Nak PA-7 (The Nakamichi PA-7 power amplifier) sweat, clip, and cry “uncle” in the form of thermal overload shutdown when I crank it for extended periods.  But to many audiophiles they are, and always have been, the holy grail.