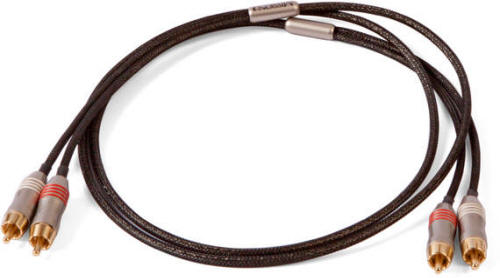 I just got the Zu Audio Wyle interconnects, so I couldn’t wait to hook them up and listen. I’ve spent enough time listening to vinyl on my system and the system is now good enough (playing vinyl anyway) to start to hear the differences the tweaks will make.

New 180g Fleetwood Mac Tusk was already on the turntable so I dropped the needle on it after hooking up the Zu Audio interconnects. First impression was that there was an appreciable improvement, but that isn’t one of my reference albums so I went straight to some of my reference vinyl to check.  Steely Dan Aja…  No, not there. MFSL of the Kinks, Misfits…  Still nothing I could notice (and I wanted to..). Then I grabbed NIN, which isn’t a long time reference for me but all the NIN vinyl is off the charts good sound quality so it immediately became one.  Yep,  similar improvements to the mid and high definition and even tighter bass.  So… Just to make sure, one of my all-time references went on – Pink Floyd, DSOTM, which I just listened to recently.  Yep, subtle but same improvements as previously noted.  More pronounced on the classic measure of the track with the alarm clocks going off.

As for where the interconnects fit into the equation of a high end system, the following quote is what i’ve been saying all along.  But it’s a pleasant suprize to hear it from Zu Audio, who sells high end interconnects, which is very different than the “snake oil” pitches of other companies (A few good examples of fact vs. fiction in the high end audio world:):

“Get the right loudspeakers for your sense of music and sound, find the happy amp that feeds ‘em; then get busy on your analog and digital source needs. Fill your room with a bunch of albums and books and stuff. And once you have a hi-fi rig you like, start messing with cable.  And careful not to use cables as tone controls to fix a loudspeaker or setup issue—it’s a trap that will have you spending more money on accessories than on music.”