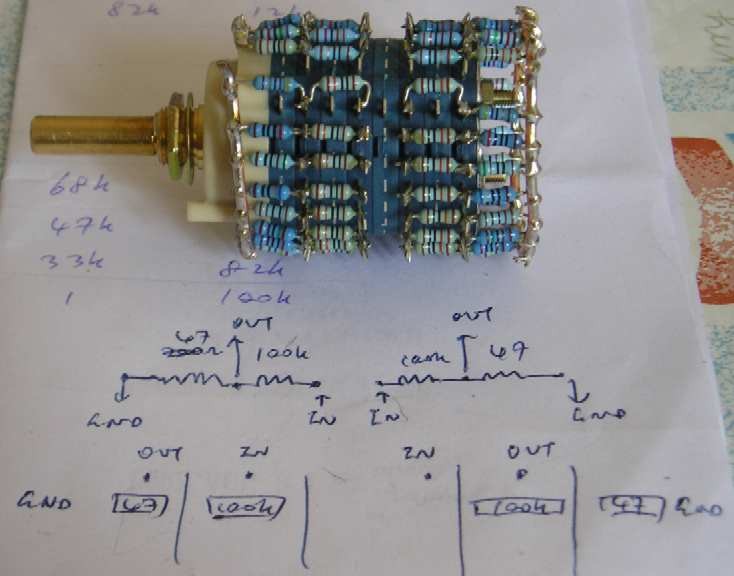 Ok… so this is a bit of an exaggeration, but in many instances it’s entirely true.  If you want a purely analog signal path then there are limited ways to control the volume.

Once the analog audio signal is converted to digital, you have the ability to modify the volume all you want, as well as endless other digital manipulations.  But converting a high quality analog source to digital for any reason is a bad idea.  Converting it to digital just to change the volume without getting out of the listening chair is an extraordinary bad idea.  I prefer analog preamplifiers that lack tone controls entirely to avoid any degradation of the analog signal path, but that’s another topic (Why I prefer analog preamplifiers that lack tone controls).

If you have a remote control in your hand, consider how it’s changing the volume.  If the remote control is for a typical AVR (Audio Video Receiver), it’s most certainly converting signals to PCM digital to do so.  If the signal is already PCM digital, no big deal you’ve already sacrificed analog quality.  But if its the analog output of a DSD signal (such as from a high quality SACD player) or a high quality phono stage then beware, your signal will get PCMed just to have remote control of your volume.

Think about this for a moment…  Say you have an amazing DSD recording from an exemplary source SACD.  Then say you have a fantastic SACD player with the best DACs that fastidiously covert your high quality DSD stream to the very best quality analog signal possible (because you avoided an HDMI cable, right? – Just say “no” to HDMI).  Then this signal gets ADCed (analog to digital converted) and what’s worse, that ADC puts it into PCM digital, and then DACed again from PCM digital to analog just for a volume remote control?!

While on the topic of DSD, it’s also important to note that if you are bit streaming native DSD from a music server you still won’t have a digital volume control.  If you change the volume slider on your computer music server and the volume changes, it’s been PCMed 🙁

The alternative is a stepped attenuator, such as that show in the photo above.  These use resistor ladders in order to precisely attenuate the volume in distinct increments.  Most audiophiles consider these to be superior since they offer more discrete circuitry.

Both of these controls, however, lack a simple means to remotely control volume.  For a potentiometer to have a remote control, it needs to be motorized, and that’s exactly what many high end audio manufacturers did as remote controls became more and more ubiquitous and expected.  If done properly, this is a very effective solution to the dilemma  of actually having to get off the couch to change the volume.

But attenuators lend themselves to digital manipulation, whereby a separate digital circuit is used to choose which resistors in the ladder go into the signal path and therefore attenuate the volume accordingly.  It’s important to note however that in spite of having digital circuitry inside the preamplifier in order to intercept the signals from the remote control, there is no digital circuitry used in the audio signal path.  It remains purely analog.

I’m sure you can see how both these solutions, especially the latter of digitally controlled stepped attenuators, gets pricey in a hurry. Therefore unless your preamplifier is accordingly expensive, it’s probably not using them.  There are many, many purported high end preamps that are PCMing your analog signal just for volume control.  Avoid them.  Either save the $$$ and get out of your chair (my preference) or splurge on one that isn’t defeating high end audio in favour of convenience and price.

22Aug2016 – There is a recent development in audiophile volume control: Light Dependent Resistors.  While it’s satisfying to see high end audio components pay closer attention to how volume control is accomplished, the cost is a bit disconcerting.  I first noticed this technology implemented in the $65,000 Constellation Audio’s Reference Series Altair II / Line Stage, and for that price you don’t even get a phono stage.  That said, you can’t beat the complete optical isolation this solution offers and the technology is already trickling down to more affordable preamplifiers, such as Tortuga offerings: http://www.tortugaaudio.com/saying-yes-to-light-dependent-resistors/