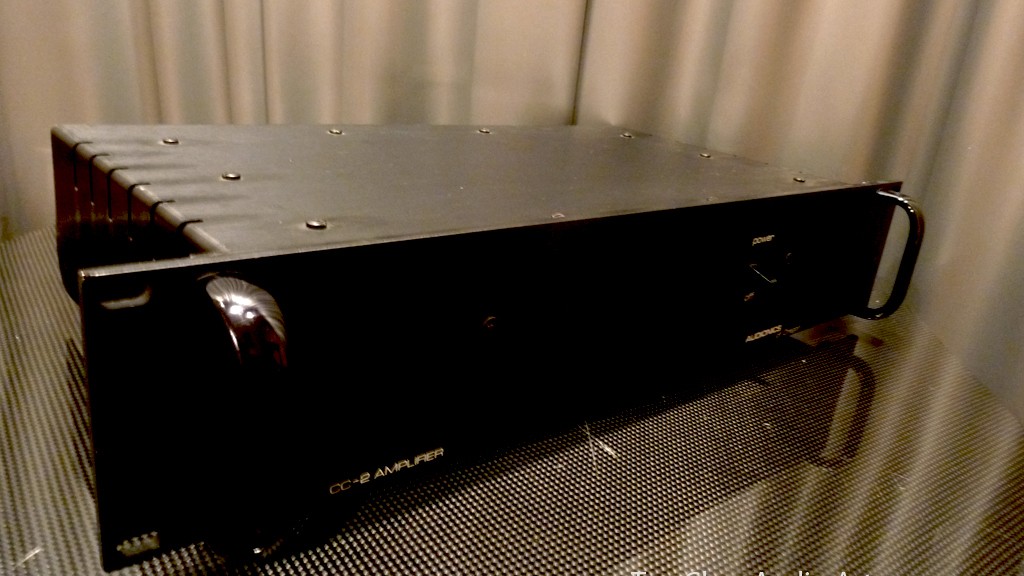 I worked at Audionics of Oregon as a summer job back in 1978.  My duty was final assembly and packaging of their components, including their most successful power amplifier during their brief tenure on top of the solid state, high-end audio world, the CC-2.   I would lock-tight a few nuts that clamp the power supply caps in place, hook up a few wires here and there, apply a silicone heat transfer compound to the heat sinks, screw on the lid (which also formed part of the heat sink), and the front panel (yes… also part of the heat sink) as well as the handles then box the whole thing up with a manual for shipping.  Of course, one of the perks of working there was great employee pricing, so I got to own a couple of these beauties in my home audio system.  And this 70 watts-per-channel “giant slayer” has never ceased to amaze me ever since.

I ran all sorts of different speakers with them, using them to show off the capabilities of speakers I had at the time in my home audio business.  They ultimately found a home driving my “keeper” loudspeakers, the now legendary Magneplanar Tympani 1Ds (It’s all about reducing mass for the transducers).  While the very difficult low-impedance load of the Tympani’s certainly made my CC-2s sweat, they always handled the task with aplomb, granted in the small listening room afforded by a teenager (Why do speakers need to be matched to room acoustics?…).  One of the many, many things I learned while at my apprentice of sorts at AofO was how important the oft-overlooked amplification specification of “slew rate” (What is “Slew Rate” and why does it matter?…) was in order to properly drive most speaker designs without the decidedly unmusical effect of intermodulation distortion.  AofO was the first US manufacturer to take a serious look at this and sacrifice their THD specs whilst many of their competitors ignored how their amplifiers actually sounded in order to participate in the “THD Wars” (The THD Wars – why lower distortion often doesn’t equal better sound quality.).

In my quest for audio nirvana in my Maui system, I was on the hunt for a CC-2 to drive my beloved Kef 104/2s (The Venerable Kef 104/2), which had already blown two vintage power amps in spite of their essentially benevolent character, albeit a bit on the low impedance side at 4 ohms (nominal).  So I picked up an Audionics of Oregon CC-2 in Vancouver and disassembled it (because I know how they are built) into pieces that would fit into my carry-on bag for the flight.  Yes, strange looks at security, but they let me through.

I honestly don’t think I’ve ever pushed an amplifier as hard as I have my now 40 year old CC-2 driving my Kef’s on Maui.  I bought a spare for parts (cause you’re never gonna find the original Motorola power transistors on eBay) and with two CC-2s I had to try bridging them into mono, one per speaker.  But that gave them fits as they don’t like the 4 ohm load when bridged in mono so I just choose the better of the two, left it in stereo, and have the other in storage just in case.

The CC-2 runs hot.  And remember, the entire chassis is the heat sink for the power transistors so it can get so hot that you can barely even touch it.  Yes… we’re talking frying pan hot, you could cook your eggs any way you wish on top of it.   But this amp likes it hot.  It actually sounds better that way.  If it’s not breaking a sweat, it’s not happy.  Not bad for an un-modified 40 year old, eh?  I knew this about this amp from days past, but was still cautious at first.  Then I was like, “it’s got this” and next thing you know I’m blowing fuses right and left (literally).  Then… I remembered, the fuses are under-rated for what this little trooper of an amplifier is capable of and replaced them with higher rated ones (Blown fuse amplifier woes.)

The CC-2 was a break-through design in the 1970s, whose merits endure to this day.  It defied the THD wars during the era of it’s creation, and has stood the test of time for that very reason.  It was created during the vinyl era and, not surprisingly, it excels in a purely analog signal path starting with my Denon 103R low output moving coil (LOMC) phono cartridge (The formidable Denon 103 vs. 103R low output moving coil phono cartridges – is there really a difference?…) running in a vintage turntable capable of handling it’s low compliance requirements (Denon DP-790W turntable review).  Then this delicate, very low voltage signal runs through an upgraded tonearm cable (Time for new tonearm cable?) into my Nelson Pass designed phono stage (The Nakamichi CA-5A preamplifier) and is transferred to my CC-2 via Zu interconnects (I just got the Zu Audio Wyle interconnects.), and finally to the Kefs with a fine pair of Zu Audio Libtec speaker cables (Speaker Cables).  In a purely analog world, the CC-2 is a super-star.

If this amplifier was a person, it would be Clint Eastwood at his best, “Go ahead punk, make my day”.  And in it’s “golden years” still Clint Eastwood but in Gran Torino style (an old, grey-haired guy who you underestimate at your own risk).  All I know is there is no other power amplifier I’d rather have driving my Kef’s.  All day, every day.  The CC-2 and Kefs just dance so well together (Why do power amps need to be matched to speakers?…), which makes sense since Kef drivers were utilized in the speakers released by Audionics of Oregon at the time the CC-2 started production.

The CC-2 is also a perfect match for the 15 ohm Rogers LS3/5As (What is it about the Roger’s LS3/5A?…) I built in Canada, which also use Kef drivers (Kef T-27 tweeters and Kef B110 midranges).  How do I know this?…  Because I owned a pair of LS3/5As and listened to my CC-2 driving them back in the late 1970s – a legendary audiophile magic combination that most certainly wasn’t replicated with at least $10k worth of Bryson amps driving modern planars in a listening room at a dealer recently.