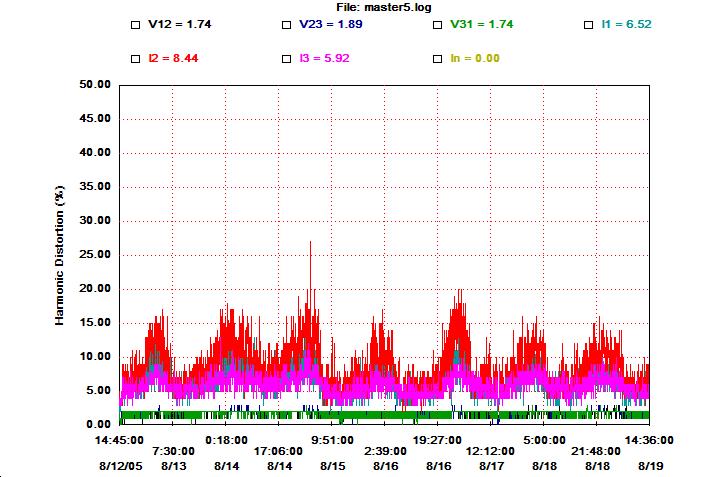 Who remembers how the THD (Total Harmonic Distortion) wars of days past nearly killed sound quality in power amplification circuits?…  This was a far more insidious and localized demise than the certain-death sentence imparted by 16-Bit CDs.  But it was an infections, tone-sucking demise none-the-less.  So how can lower distortion be a bad thing?  That requires a closer look at two things – what is being measured and how it’s reduction is being accomplished.

Harmonic frequencies (also referred to as “harmonics”) of a periodic voltage or current are components in the amplified signal that are at integer multiples of the frequency of the original signal.  Harmonic distortion in audio circuits is the deviation of the amplified signal due to the presence of these harmonics.

Now let’s look at the harmonic distortion of these two waves. 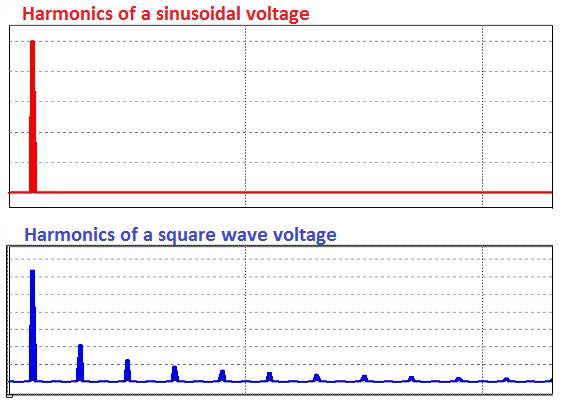 So all the subsequent peaks at the harmonic frequencies of the square wave (blue) are distortions of the original signal and a bad thing.  The total harmonic distortion (THD) is the additive effect of all these peaks so getting rid of them in audio amplification circuits must be a good thing…  right?

The answer is yes, to a point.  Part of the trouble with this method of measurement of THD is that it doesn’t account for how the human brain perceives it and account for the fact that the order of the distortion (which multiple of the fundamental frequency it represents) has a far more audible effect than its absolute magnitude.  When three or more fundamental tones of distortion are present (in the illustration of a square wave above there are 10), the distortions represented by the higher orders are far more audible and undesirable, mainly due to intermodulation distortion (more on that later).  This was first discussed by Norman Crowhurst and D.E.L. Shorter of the BBC back in the mid 1950s.  They even advised a weighted measurement where the higher order harmonics accounted for more of the THD value, though this was never adopted.

Back in the days of tube amplifiers, THD was a very real measurement of sound quality and had a correspondingly high value by todays standards, often around 1% (the iconic Dynaco/Dynakit ST-70 tube amplifier was rated at <1% for example) .  But with the advent of solid state electronics , it became far easier to introduce large amounts of negative feedback (60 dB or more) in order to drastically reduce THD, and many manufacturers did exactly that.  Comparisons became more infinitesimal and the “THD wars” to drive it lower resulted in values below 0.1%, then below 0.01%, then even below 0.001% using op-amps (Op Amps are holding back my digital quest).  In order to understand how this can be a bad thing, let’s take a look at how a simple negative feedback loop works.

According to Wikipedia, “A negative-feedback amplifier is an electronic amplifier that subtracts a fraction of its output from its input, so that negative feedback opposes the original signal.”  In other words, it compares the output signal to the desired input signal and subtracts out any extraneous information (i.e. distortion).  Sounds good… right?  In a perfectly linear world, it would be.  But real life isn’t perfectly linear and power amplifiers are no exception.

Negative feedback principles have been around for a long, long time and moderate amounts were implemented to good effect in tube amplifiers to some degree.  But the over-application of NFB in audio amplifiers only became standard practice because transformerless transistor amplification circuits enabled its easy use.  In the tube amplifier era it was the output transformer which, due to its complex transfer function, limited the amount of NFB in power amplifiers to around 20 dB.

So introducing strong negative feedback into inherently non-linear transistor audio amplification circuits has two significant flaws – far lower gain (often overcome by cascaded amplification) and the complications of transient intermodulation (TIM) distortion, especially in slow (low slew rate) circuits.  Simply put, if a burst of a fixed frequency is input into a transistor amplifier with strong negative feedback, additional (unwanted) frequencies will be found on the output due to TIM distortion.

To obtain ultra-low THD specifications, manufactures of power amplifiers thereby killed the audio quality of their products.  This explains why a low-fi Audio/Video Receiver (AVR) full of integrated circuits (ICs – Nude photos of analog gear usually tell a big part of the story) has a far lower THD specification than the best-regarded triode (i.e. tube) amplifier, even though any listener would invariably hear the better sound quality of the latter.  In a sense, overuse of NFB in transistor power amplifiers was the beginning of the end of high end audio, followed by limiting the source material itself to 16 Bit PCM digital, then compressing this already inadequate signal to MP3 files as the final blow to music’s destruction (The “Dark Ages” of High End Audio).

This brief discussion is intended to point out how some traditional measurement results (such as THD) can result in unwise decisions for amplifier design.  Unfortunately the THD wars of days past steered the designer, the reviewer, the dealer, and the consumer away from good sound.  Nelson Pass, one of the very best amplifier designers of all time, has very strong beliefs with respect to how an amplifier should be designed, chief among these being that it is far more important to limit higher order harmonic distortion than it is to seek artificially low overall distortion levels.  He also debunks the watt per channel (WPC) wars, but that’s another topic (Why it’s not about watts per channel).

Back in the 1980s, at the height of the THD wars, Nelson Pass  developed a clever way to create a highly linear solid state power amplifier with his “Stasis” circuit topology and thereby was able to eliminate the use of negative feedback entirely while maintaining a THD spec of just 0.1%.  Much higher than competitor’s offerings at the time but still inaudible and he thankfully stood fast against the overuse of negative feedback just to participate in the battle.  Stasis was subsequently licensed by Nakamichi and implemented in their venerable PA-7, one of the best power amplifiers to come from the era (The Nakamichi PA-7 power amplifier).  Audionics of Oregon is credited with producing the first US built low negative feedback, low TIM distortion solid state power amplifier with it’s CC-2 (The Audionics of Oregon CC-2. More distortion, more better.), which had a THD rating of 0.18% (0.35% when bridged into mono) and utilized only 23 dB negative feedback (very low by the standards of the time).  This amplifier was based on the research of Matti Otala of The Netherlands, who pioneered the concept in 1973 and produced a prototype with a high slew rate of 100 V/microsecond, only 20 dB of negative feedback, low TIM distortion value of only 0.15%, and not surprisingly high THD of 0.2% (more info here).

“The bottom line is the ear is not a microphone, the brain is not a tape recorder, and measurements are limited in describing subjective quality. I like to have low distortion and so on, but these things take a back seat to what I experience when I listen. There are plenty of products which have great specs – I will not be offended if you buy those.” – Nelson Pass

Interestingly, the THD Wars have finally come full circle and many manufacturers of high end audio amplifiers (Audio Research, for example) are now advertising their products as having “no negative feedback” and their THD specifications are correspondingly much higher than their low-fi competitors.  This is why it’s important to audition the audio gear you are considering, since the specifications are only an attempt to measure sound quality and… in the case of THD specifications that are driven artificially low with the overuse of negative feedback, a very poor one at that.